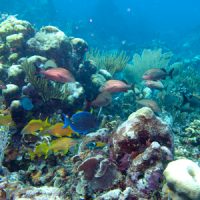 closeAuthor: Jack Wasserstein, DDS Name: Jack Wasserstein, DDS
Email: jack@wasserstein.com
Site: http://www.wasserstein.com
About: I am a Periodontist in Valencia CA and I have been in private practice in since 1990. I am blessed to be able to say that my work is also my play. I hope to share my insights, with you, that I have cultivated over the last 20 years.See Authors Posts (26) on July 31, 2010 in Periodontal (gum) disease 101

Although it sounds like an unusual analogy, the process that causes periodontal disease is extremely similar to the coral reef in the ocean. I like to use this analogy when explaining gum / periodontal disease to my patients. Though it is simplified its an easy concept to understand.

A coral reef is human fascination. It blossoms with a variety of sea life from animal to plant life. Its a diverse ecosystem in which its inhabitants are extremely dependent on another for survival, whether it is predator prey, shelter or symbiosis. The coral reef is a very efficient system.

A coral reef begins to form when coral larvae, always present in ocean water, find something to attach too, typically a rock and start to grow. As the coral matures, it begins to support other forms of sea life which benefit from the coral itself, or shelter it can provide and so starts the cycle as that sea life will attract other types of sea life. However, even in an mature established reef if you take away rocks and coral, effectively the infrastructure, the rest of the ecosystem dissipates.

Here is how the coral reef theory applies to periodontal disease. Saliva is the primary component of the oral ocean. Contained in the saliva is bacteria (multiple species), minerals, proteins, sugars, food particles etc. This mixture forms a sticky residue called plaque that coats the entire mouth 24/7. If not removed, within 24 hours more minerals from the saliva cause the plaque to crystallize on the tooth. The primary goal of brushing and flossing is to remove the bacterial plaque layer before it crystallizes on the tooth. In the crystallized form plaque is called calculus or tartar. Calculus is the coral reef in the ecosystem of periodontal disease. Although all tissues of the mouth form bacterial plaque calculus only forms around teeth, since the cells from the other tissues are constantly shedding and being replaced with newer cells the plaque layer gets shed with the cell and doesn’t have time to crystallize.

Once calculus is formed, a tooth brush alone is not enough to remove it. It must be mechanically removed by a dental professional. Calculus deposits continue to grow as plaque layers form and mineralize. Calculus deposits provide an ideal environment for bacteria to flourish.

At the start of this process in a healthy mouth, calculus formation happens above the gum line on the teeth. However, as the calculus matures, the byproducts from the bacteria that it contains causes inflammation of the gum and breakdown of the ligament that binds the gum to the tooth root, see pic above, that are in close proximity to the calculus. This creates a zone of space between the gum and tooth. This space is called a gum pocket. This space is problematic for a number of reasons. Bacterial plaque begins to form on the tooth root surface where the ligament used to be. It becomes difficult to clean this plaque off the root surface because its hidden under the gum line and access is a problem as the tooth brush bristles do not penetrate beyond 3mm into the gum pocket. In addition, the environment inside the gum pocket is different it has less oxygen and supports different species bacteria called anaerobic (lives without oxygen) which are more destructive to the gum / periodontal tissues. To summarize, gum pockets are bad because they are hard to clean and they support a more virulent variety of bacteria.

Gum pockets deepen with time. There is continued breakdown of periodontal ligament as the plaque migrates down the tooth root surface. Eventually the pocket reaches the level of the bone that supports the tooth root. Unfortunately, the bone is also destroyed by the inflammatory process as the plaque gets into the proximity. Once the depth of the gum pocket invades the supporting bone it is referred to as a periodontal pocket. Ultimately tooth loss results from advanced periodontal disease because the the supporting bone of the tooth root is destroyed and there is nothing left to anchor the tooth.

Gingivitis is an inflammation of the gum / gingival tissues around the tooth. It is typically plaque induced and is reversible by removing plaque. Gum pockets are usually present but are not at the depth of the supporting bone around the tooth. Although not ideal, gum pockets less than 3mm are considered maintainable with proper brushing and flossing and routine cleaning visits with a dental professional. Gum pockets in the presence of gingivitis should be addressed before it turns into periodontal disease. This is usually diagnosed by using a periodontal probe which is blunt instrument inserted into the gum pocket to determine the depth and see if there is bleeding following its removal. The probe does not penetrate inside the gum tissues so if there is bleeding its a result of the probe touching the inflamed gum tissue. There may be redness and swelling of the gum tissue as well.

Periodontitis is a progression Gingivitis. When the bone becomes involved as a result of deepening gum pockets it is diagnosed as Periodontitis. unlike Gingivitis the destruction of bone is not necessarily reversible. And though it usually progresses very slowly and over a long period of time, the sooner it is treated the better because you want to preserve as much bone as possible.