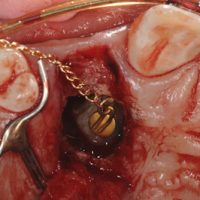 closeAuthor: Jack Wasserstein, DDS Name: Jack Wasserstein, DDS
Email: jack@wasserstein.com
Site: http://www.wasserstein.com
About: I am a Periodontist in Valencia CA and I have been in private practice in since 1990. I am blessed to be able to say that my work is also my play. I hope to share my insights, with you, that I have cultivated over the last 20 years.See Authors Posts (26) on November 13, 2010 in Crown lengthening

Abnormal eruption of a maxillary canine can result in an impacted tooth, where the tooth can no longer erupt into its proper position in the arch. The tooth gets physically stuck in the bone where other tooth roots block its passage through the bone. This case demonstrates a maxillary impacted canine, tooth #6 which has erupted horizontally, rather than vertically. Subsequently, the crown of tooth #6 ran into the root of the central incisor, tooth #8, which is now blocking it.

Periodontal surgery can be performed to expose the crown of the tooth. From there, a bracket is bonded to the tooth. The tooth can then be orthodontically maneuvered back into its correct position in the dental arch. This surgery is a form of crown lengthening.

One of the challenges with this procedure is determining orientation of the impacted tooth relative to the tooth root that is blocking its path. This orientation is necessary so that the Periodontist knows whether to approach the surgical exposure from the lip (buccal) or roof of the mouth (palatal) aspect. 3D cone beam tomography is employed to determine this orientation. As you can see from the 3D renderings, it was determined that the crown of the impacted #6 was palatal to the root of #8 which is blocking its eruption path. Thus the tooth must be accessed from the palatal aspect as it would not be possible or could severely damage the root of #8 by trying to orthodontically move it in the buccal direction.

An orthodontic bracket is bonded to the newly exposed crown. A laser is used to create a hole in the gum flap to allow the chain connected to the bracket to exit out of the tissue. The exposed crown will also follow this path as the tension from the chain guides the tooth back into its proper position into the dental arch. The chain is initially ligated to the arch wire. The patient is then referred back to their orthodontist to have the chain attached to the orthodontic appliance so that tension can be applied.

The process of erupting the tooth happens over weeks to months. Generally the deeper and more horizontal the impaction, the longer it will take to erupt back into the arch.